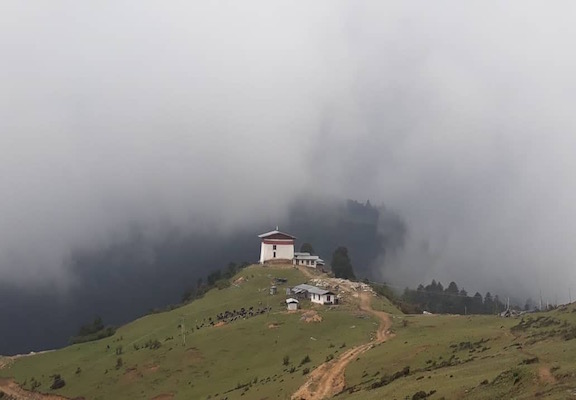 Gangtey Trek Starts from Phobjikha. Phobjikha Valley, at 3000meters, is in one of the few glacier valleys in Bhutan. It is the chosen home of the rare black-necked cranes which migrate here in winter from the Tibetan Plateau. The valley of Gangtey is one of the most beautiful places in Bhutan and the Gangtey Gompa monastery is the only Nyingmapa monastery on the western side of the Black mountains. This moderate trek passes through the village of Gogona and Khotokha, through meadows and fields, then forest of juniper, magnolia, and rhododendrons. One of the finest low-level treks in Bhutan.

Upon arrival at Paro airport, you will be received by a Representative of Yak Adventure Travel, transfer to the hotel. After Lunch, visit Ta Dzong, an ancient watchtower, which now houses the National Museum. Below the museum is the Paro Rimpung Dzong, the center of civil and religious authority in this valley. A short walk takes you to the base of the dzong and across a traditional cantilevered, covered bridge. In the evening, dive to Thimphu. Dinner and overnight in Hotel.

The day begins with a visit to the National Memorial Chorten (1974) built in honour of our late King Jigme Dorji Wangchuk and the Dupthop Lhakhang one of the few surviving nunneries in Bhutan. We then visit the National Library, stocked with ancient Buddhist manuscripts, and the Painting School where traditional art is still kept alive through instructions in the art of painting Thangkas (sacred Buddhist religious scrolls).

After lunch we drive to the Traditional Medicine Institute where medicines are prepared according to ancient practices, Changangkha Lhakhang, Takin Preserve Center and the View Point. In the evening, visit to the Tashichho Dzong, seat of the national government and the Central Monastic Body, including the summer residence of the Je Khenpo (Chief Abbot of Bhutan). We drive to Simtokha Dzong; the oldest Dzong of Bhutan built by Shabdrung in 1627 and finally visit the Handicrafts Emporium followed by shopping for souvenirs in the shops of Thimphu. Over night in Hotel.

After breakfast, drive to Punakha via Dochula pass. If the weather is clear, we stop for a while at Dochula pass to view Higher Himalayas. On the way, stop a while to view Chimi Lhakhang, which was built by Lama Drukpa Kuenley in 15th century. He subdued the demons with his “Magical Thunder bolt”. The Temple is also known as “the Temple of Fertility”.
While in Punakha, visit Punakha Dzong built in 1637 by Shabdrung Ngawang Namgyal and is situated between Pho Chu (Male river) and Mo Chu (Female river). For many years until the time of the second king, it served as the seat of the Government. The construction of the Dzong was foretold by Guru Rimpoche, who predicted, “…a person named Namgyal will arrive at a hill that looks like an elephant”. There was a smaller building here called Dzong Chu (Small Dzong) that housed a statue of Buddha. It is said that Shabdrung ordered the architect, Zowe Palep, to sleep in front of the statue, while Palep was sleeping, the Shabdrung took him in his dreams to Zangtopelri and showed him the palace of Guru Rimpoche. From his vision, the architect conceived the design for the new Dzong, which in keeping with the tradition, was never committed to paper. The Dzong was named Druk Pungthang Dechen Phodrang (Palace of Great Happiness). The war materials captured during the battle with Tibetans are preserved here. Punakha is still the winter residence of Je-Khenpo and King Jigme Dorji Wangchuk convened the new national Assembly here in 1952.
After lunch drive for 2 hours Gangtey. Overnight in a Hotel.

The trail winds up on a slow climb through field and then ascends the Tselela Pass for your lunch stop. Then the trail descends gradually for some time trough forest of juniper, bamboo, magnolia and rhododendron. After the last short climb you will reach Gogona village. The people of Gogona were originally nomads and they speak a language, “Jopkha” (language of the nomads). Distance 15 km, about 6 – 7 hours.

In the morning you will climb up a gentle slope to Shobjula (11,155 ft.) for your lunch stop. Then the path leads down to a wide valley of Khotokha, a summer place of the people of Sha (under district of Wangduephodrang) Distance 15 – 16 km.  Time about 6 – 7 hours.

A short ascend leads to Mulaila pass (9200ft.) then the path descends through ever-changing vegetation till the bridge in Wangdi Phodrang. Your trek ends here at. Overnight at the guesthouse

Drive to Thimphu. Thimphu is about 2.5 hours drive from Wangdi. Thimphu is the most crowded capital in Bhutan with about 135000 people living in the city. If time permits we visit memorial chorten built in the memory of Third King, Folk Heritage museam and 13th Arts and Crafts School.

After Lunch, Excursion to Cheri Monastery. Dinner and over night in Hotel.

Day 08: Thimphu to Paro Airport and see off

Todays ends the Gangtye Trek. Our team from Tour Bhutan will assist you to Airport and see you off.

What is NOT Included in the Cost?

Why Book this Trek with Us?

Start Chatting with our experts

Mail Us your Inquiry