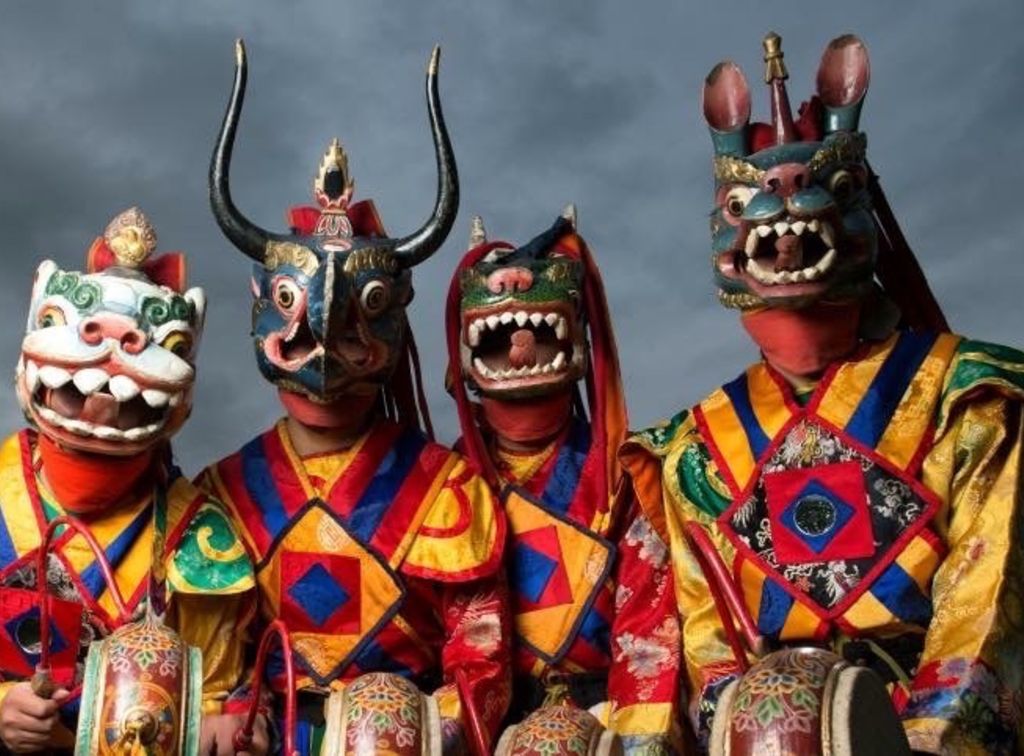 Bhutan Festival Tours. Festivals and Dances go hand in hand in Bhutan. If the festivals are almost always religious then dances are morally intrusive. Attending the festival is said to bestow merits and that is the sole reason why we have so many locals with familt attend the festival. The Tshechu is a religious event celebrated on the tenth day of a month of the lunar calendar corresponding to the birthday of Guru Rimpoche (Guru Padmasambhava). However, the exact month of the Tshechu varies from place to place and temple to temple. During the festivals monks and laymen perform mask dance over a stretch of three to five days in a temple or a monastery. The festval conclude with the unfurling of a Thongdrel(large scroll painting) of Lord bhudha, Guru Rinpochhe, Zhabdrung and other enlightened beings. 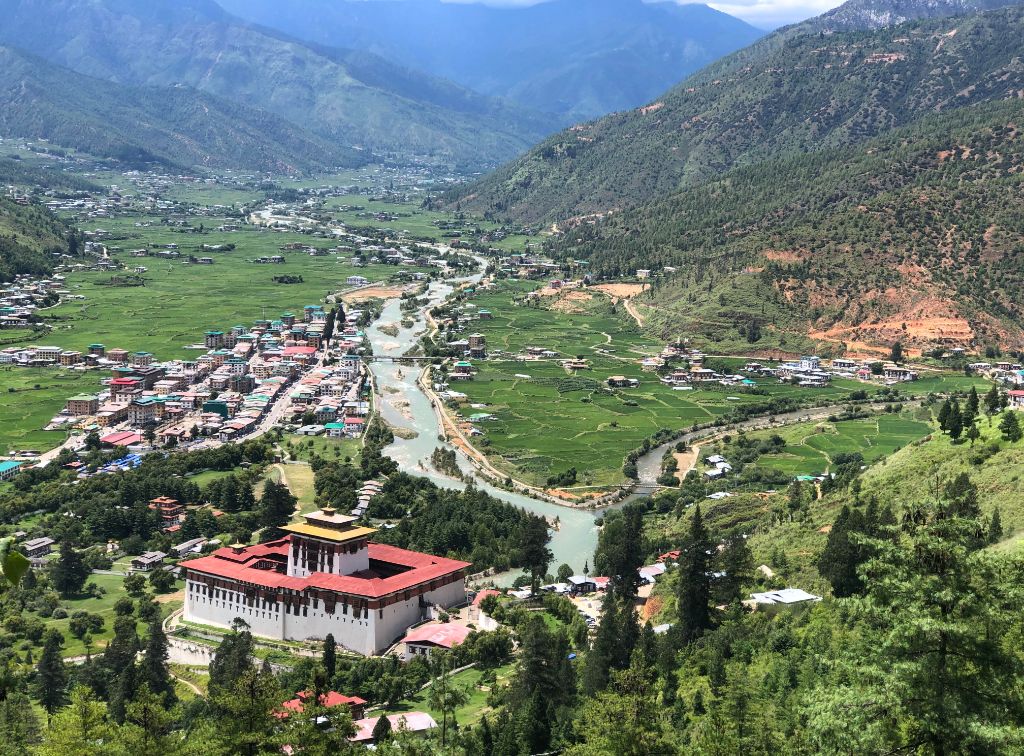 A popular festival in western Bhutan, the Paro festival is the most-visited festival both by tourists and locals. On the first day, all mask dances are held inside the courtyard of the Dzong. In the subsequent days, the courtyard outside the dzongs hosts the festivals. The festival commemorates the deeds of the great saint Guru Rimpoche which are performed in the form of mask dances. The locals attend the festival to gain merits. The festival ends with a unique unfurling of the Worlds biggest Thankas or thongdrel ceremony. It’s a unique experience, unlike anything you have ever seen before. 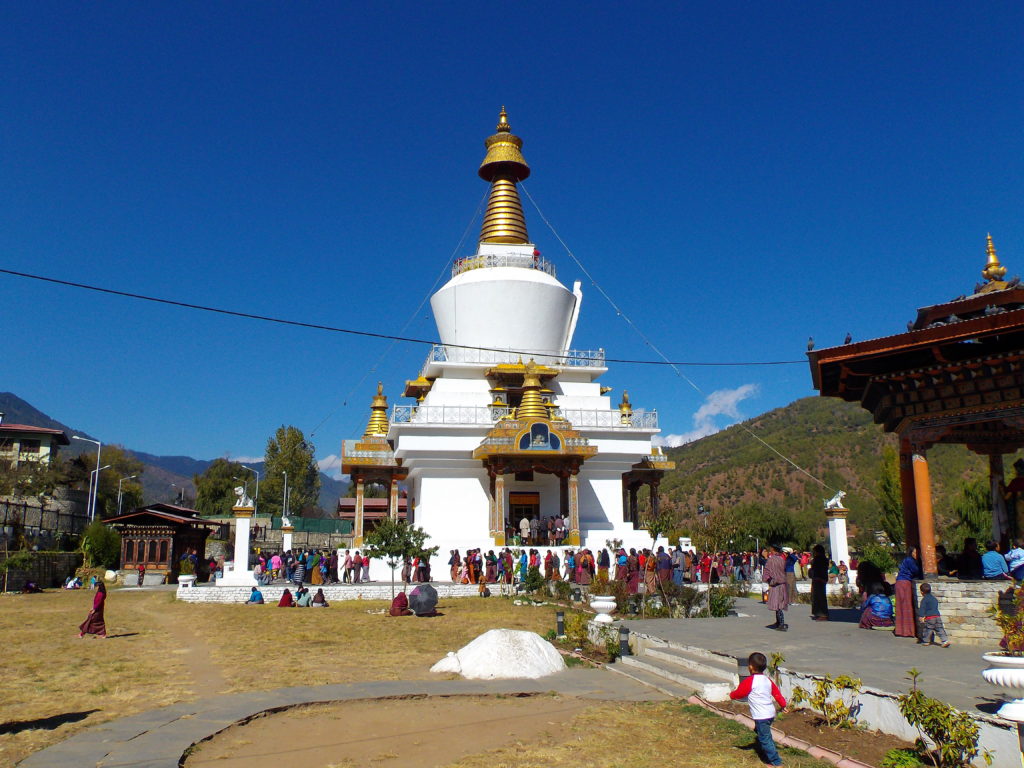 With almost 135000 people living in the small capital city of Bhutan, Thimphu is the most crowded city in the country. Thimphu festival is the most popular and one of the biggest festivals in western Bhutan. The actual festival is preceded by rituals and prayers to invoke the gods. Mask dance like Guru Tshengye(eight manifestations of Guru Rinpoche), Shaw Shachi (Dance of stags), and many more are performed. The Drupchen was instituted sometime between 1705 and 1709 by kuenga Gyaltshen the first reincarnation of Jamphel Dorji the son of Zhabdrung. 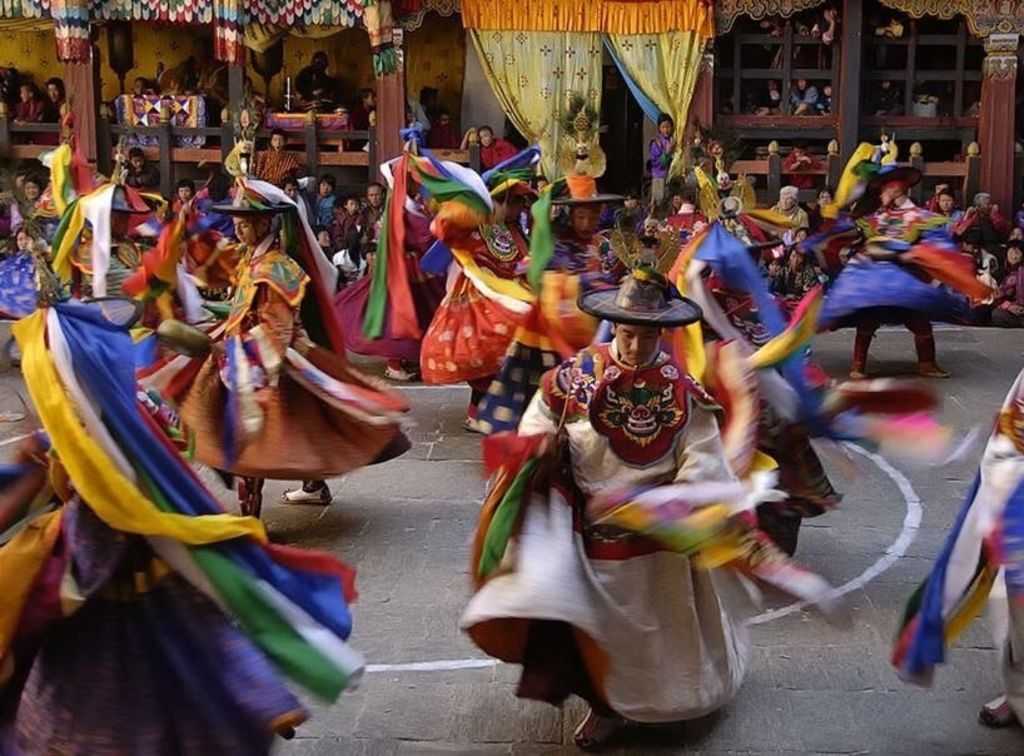 Bumthang Jambhay Lhakhang Festival or The naked dance festival is unique and celebrated in the fall of every year. Bumthang is one of the beautiful valleys in central Bhutan. The festival is held at the 7th-century Jambhay temple. Mask dances and bonfires commemorate the establishment of this 7th-century temple. The highlight of this festival is the fire ritual that is held at midnight where crowds gather to witness the ritual. A naked dance is also performed where the dancers only have their masks on. 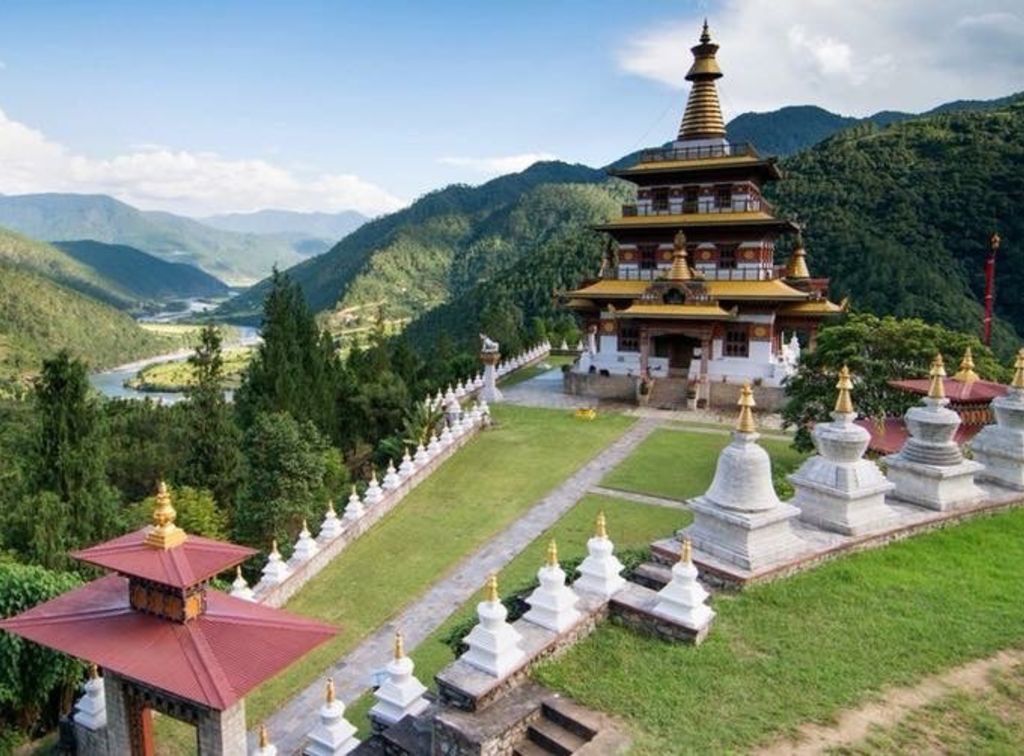 Punakha is the old capital of Bhutan and the yearly festival of Punakha Domchey happens at the beginning of the year. The festival is very unique as it hosts a dramatic recreation of the scene from the 17th century battle with the Tibetan army. This is one of the oldest festivals of the district. the festival depicts how the local Bhutanese militia duped and defeated an invading Tibetan army and forced them to withdraw. This 17th century is also the beginning of the consolidation process as Bhutan as a country and it is historically very important for the Country. 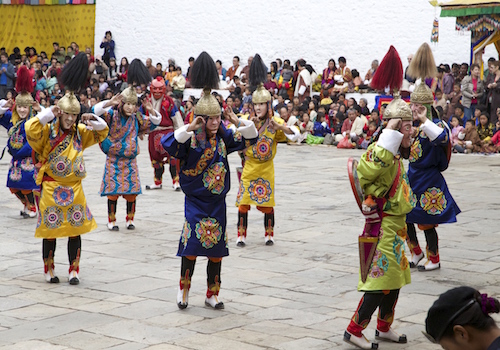 Ura is one of the beautiful valleys in Bumthang. The yearly festival is very important for locals living around the community. A sacred relic is displayed for people to receive blessings from. According to the legend, an old woman sitting outside her house was visited by a lama asking for a glass of water. When she came out with water the lama vanished leaving behind the only sack. Out of curiosity she check the sack and found the statue which is displayed every year at the festival. 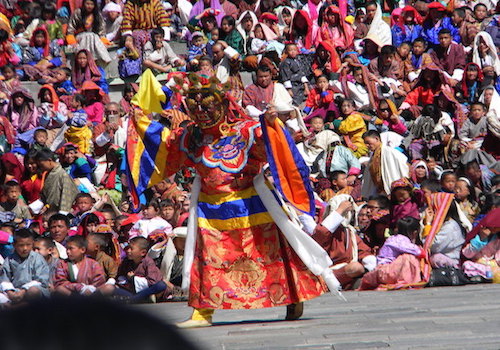 Kurjey Tsechu is celebrated in the popular Kurjey Lakhang in Bumthang. People of Jakar and Kurjey villages attend the Tshechu to pay obeisance to Guru Rinpoche who brought Buddhism to Bhutan. It is a one-day festival and the chams/dances include the Guru Tshengye and Shinjay cham performed by the monks of Kurjey Lhakhang. 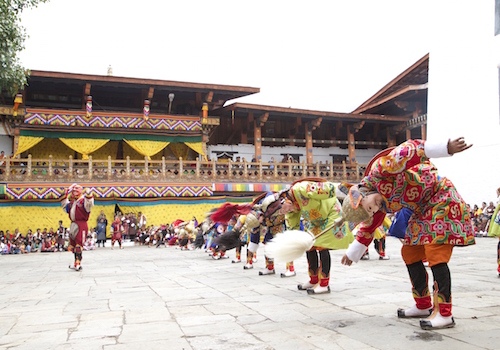 The festival of Punakha is celebrated every year before the nomadic people of Laya depart back home. The Punakha Tshechu (or ‘festival’) takes place each February or March inside the incredible Punakha Dzong, the ancient capital of Bhutan. As well as being a really fun and exciting day out for the Bhutanese, the tshechu also provides devout Buddhists with an opportunity for pilgrimage and prayer. 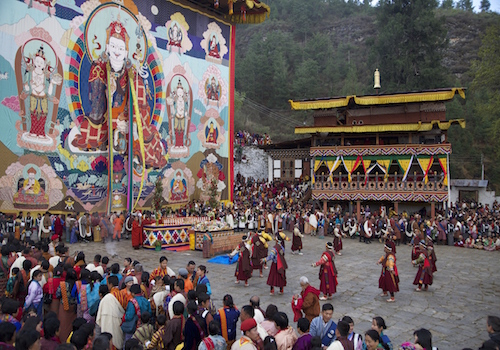 Gangtey festival is very important for people living in Phobjikha. This three-day annual festival is held with the performance of various sacred mask dances that are based on Peling tradition and some unique to Gangtey valley. The festival concludes with ngedup Langwa(receiving of spiritual wisdom)which is a special blessing ritual for the people. 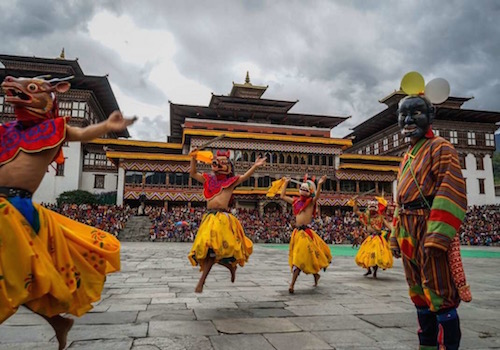 The Chorten Kora Festival is one of the most popular festivals in eastern Bhutan. “Kora” means circumambulation. The biggest activity of the festival is circumambulating Chorten Kora. It also attracts people from the neighboring Indian state of Arunachal Pradesh. It brings out colorful aspects of Bhutanese culture such as mask dance, a rich textile and brocade worn by the locals, and the triumphant atmosphere of the festival itself.

The Gasa Tshechu is the biggest event in the small district of Gasa in northwestern Bhutan. Gasa is home to highlander communities. While many mask dances are performed, the local folk dances performed are very unique and distinct adding to the festive mood of the celebration. 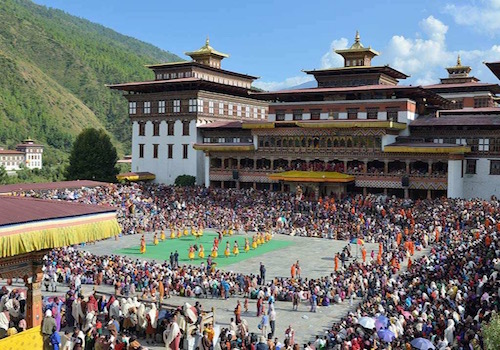 The three days Talo festival is well known for mask dance and atsara performance. An equally popular attraction which has a deep religious and historical significance , is the zhungdra (Bhutanese classical Dance) by the talo dance troupe. The three songs of Mani Sum, which comprisethe zhundra set, are performed as the closing item on each day of the three days of Talo festival. The three songs , Samyi Sala( performed on the first day) Drukpa Dungey (Second Day) and thowachiGangi Tselay on the Final Day are the pride of Talo people. 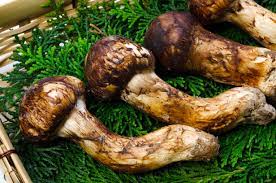 Prized by the Government of Japan, this fungi is native to the forest of Ura valley in Bumthang. Visitors learn to identify and harvest the wild matsutake mushroom of Bhutan during the festival. They can hike the valley’s fragrant trails and give in to the thrill of discovering their own private patch of this most coveted mushroom. 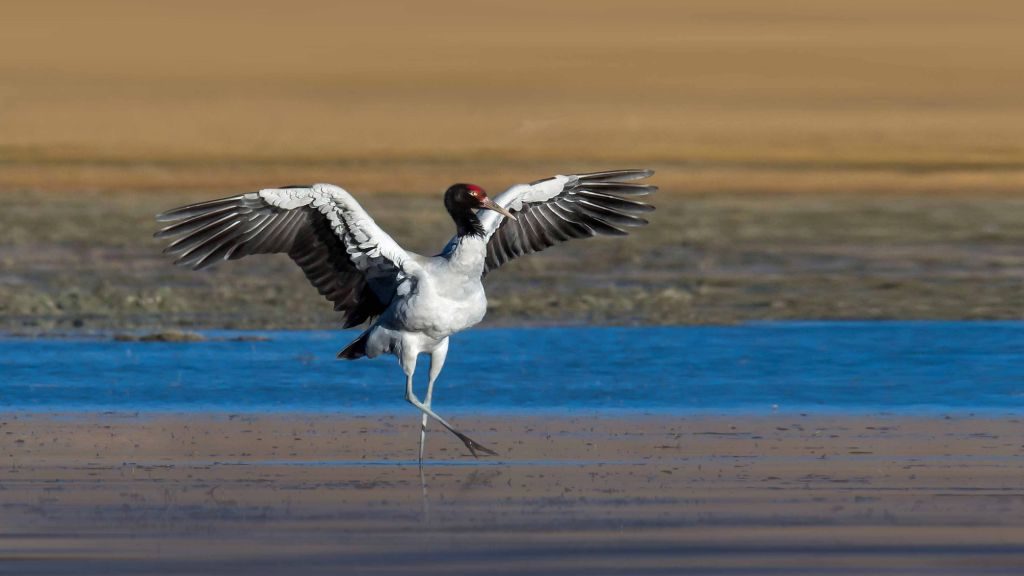 The annual blacknecked crane festival is organized to generate awareness and understanding on the importance of conserving the endangered Black-Necked Cranes. The festival includes cultural programs such as folk songs and dances (some with black-necked crane themes) and mask dances performed by the local people, crane dances and environmental conservation-themed dramas and songs by school children. 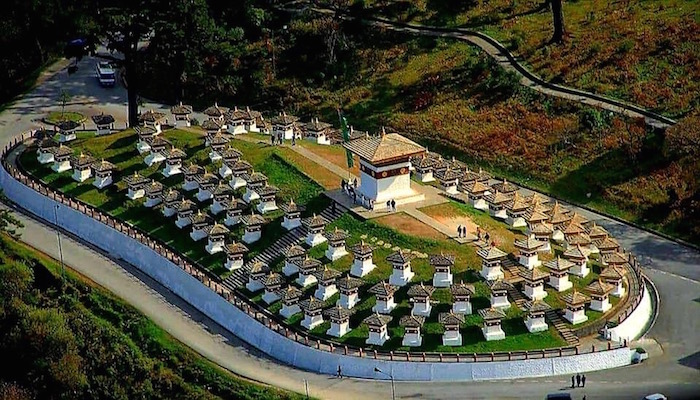 The Druk Wangyel Tshechu is a unique festival performed by the Royal Bhutan Army rather than monks or lay people. It is a tribute to the wise leadership of His Majesty Jigme Singye Wangchuck, the Fourth King of Bhutan. It also celebrates the continuous efforts of the Royal Bhutan Army in protecting the sovereignty and the stability of the country.

Wangdue Tshechu is a three-day festival of mask and folk dances founded by the 4th Temporal Ruler of Bhutan, Mr. Tenzing Rabgye (1638-1696), to commemorate the birth of Guru Padmasambhava. The festival is held in wangduephodrang Dzong. The festival is Known for dance of the Ox. 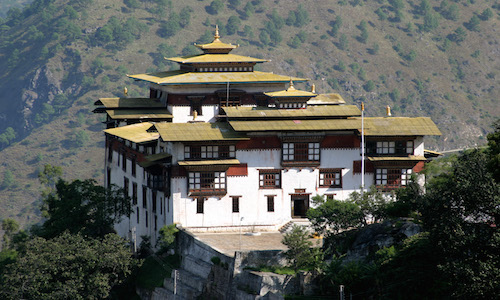 All Tshechus is followed by Mask dance and music. In Tashigang Tshechu you could see tribal people from Merak and Sakteng in their unique dresses visiting to witness the event.

This is small rural festival in the village of Nag Lhakhang in Bumthang. This festival is usuallyheld from November 21 to 23. Please reconfirm the dates for 2023. 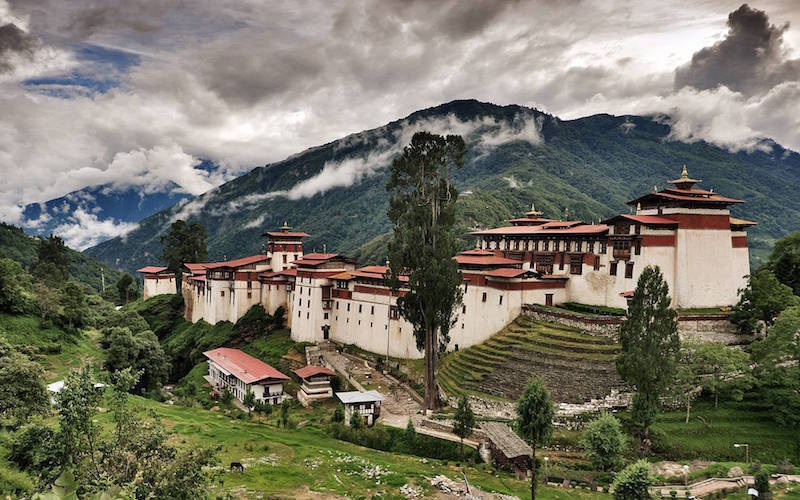 Trongsa Tshechu is held insidethe vast Trongsa Dzong and is the oldest tshechu in bhutan. It is beleived that Tshechus in bhutan spread from Trongsa. Most of the mask dance teacher, learned in Trongsa. On the last day of the Tshechu a ginat Thongdrel is unfurled.

Tangsibji is a village near Ura valley in Bumthang District. Bumthang is the cultural capital of Bhutan. The festival is held in the small village temple starting in September. 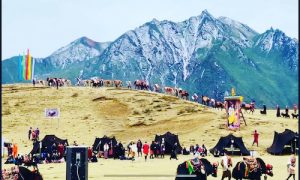 Royal Highlander Festival is being celebrated to convey the message to the world about climate change. The highlander people from Laya participate in this festival

Zhemgang is a remote district in the Country but it is the birding paradise of Bhutan. Enjoy the festival with Birds.

We are a licensed tour company based in Thimphu approved by the Tourism Council of Bhutan. We are a sister company of Excursion to the Himalayas.

Festival and Dances of Bhutan 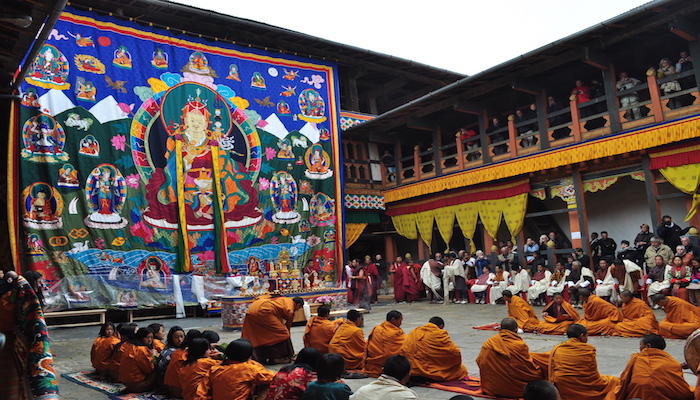 There are numerous festivals celebrated in Bhutan- both secular and religious. The most popular religious festival is called Tshechu which honors the memory of Guru Padmasambhava by depicting key episodes or great deeds from his life. This usually takes place on the 10th day of the Bhutanese calendar. The tradition of the Bhutan festival was established by Zhabdrung Ngawang Namgyal in the 16th century and many of the dances and ceremonies performed today are attributed to him or Pema Lingpa. Most of the Bhutan Festival last from 2 to 5 days and is celebrated in all the major Dzongs of Bhutan at varying times of the year.

The Tshechu is a religious festival and it is believed that by attending it a person gains merit. It also serves as the largest annual social gathering for the area with people decked up in all their finery coming to join in the celebration of good over evil, hoping all their unanswered wishes and prayers would be considered. Besides the dancers and musicians, the key character is the Atsara (Joker with big Phallus) who wears a dramatically expressive mask with a big bulging nose. The irreverent joke provides comic relief when the audience gets restive and only they are allowed to confront the monk and mock the religion(without any malicious intent).

They are actually treated with great respect as they are believed to be the representative of the ancient Acharyas-the Sanskrit word for teachers. During the interval between Chhams women in gorgeous traditional attire sing and perform classical dances. Most of the Festival ends with unfurling with great Thangka depicting Guru Padmasambhava and his eight manifestation. Such a thangka which is worshipped is called Thongdrel(Liberation on sight) and it is believed that simply by seeing it some are delivered from the cycle of reincarnation or their sins of this lifetime are washed away.

This is why people on the last day gather as early as 3 am in the morning to view Thongdrel. In some Tshechu there are customs of the wang- a collective verbal blessing high priest followed by the distribution of colored thread which the devote tie around their necks as evidence of the blessings. There are also other interesting tours and festivals you can witness in Bhutan. Check the best time to travel to Bhutan.

The religious dances are called Chhams and are performed by monks as well as laypeople, with the dances remaining the same but the order of performance varying from place to place. Chhams are the core event of the monastic festival. These highly choreographed sacred dance dramas are performed by masked lamas to the accompaniment of the monastic orchestra. The central theme is inevitably the depiction of the triumph of good over evil.

Planning to Travel Bhutan During Festival

On Popular Bhutan festival Tours like Paro Festival, Thimphu Festival seats to flights to Bhutan tend to get fully booked and for this reason, we would advise you to book the tickets with us as early as 5months prior to your travel date. Bhutan has only two local flights operating in Bhutan and there is no other International airline operating in Bhutan. We don’t charge anything for ticket booking.